In many organisations worldwide the question of team size comes up any time a new team needs to be formed or an existing team is being evaluated. While this isn’t the only factor that affects how a team will behave, nor is it the most important in the majority of cases, it is an undeniably relevant question that demands a logical answer. 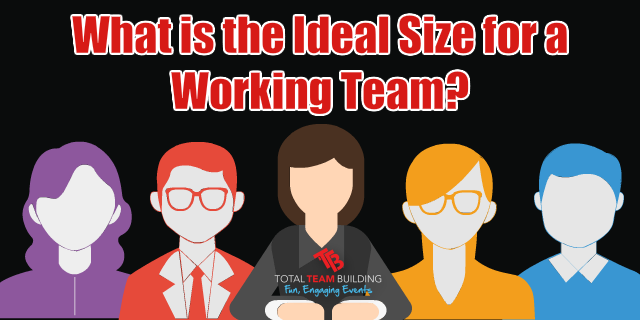 Teams of different sizes behave in vastly different ways. If you don’t manage to strike the balance properly with regards to the size of your team you might end up with a lot of preventable problems. Those teams that are too small risk having a skills gap in an important area while teams that are too large risk a loss of productivity and cohesiveness.

While it’s true that each team and each company is in a unique position with its own employees, there are some standards that have been proven true throughout a wide range of companies in hundreds of studies done around the world. When it comes to teams, size matters. There is no set number that everyone agrees is the best, because it can be different depending on a few variables, but it is certainly something to take into account when you want to form a working team.

Theories About Team Size Versus Productivity

Productivity is one of the main reasons teams are formed. Some company tasks can only be completed well when a team is working on them versus an individual trying to accomplish the same task. However, if a team is too large there is a huge risk of productivity of each individual worker going down as the size of the team goes up. This is referred to as social loafing and is illustrated beautifully by the Ringelmann effect.

The Ringelmann effect refers to some of the earliest research ever done about team size. Through an experimental process involving increasingly large groups of people pulling a rope, Ringelmann deduced that for every person added beyond 5-6 people, individual contributions to the group became smaller. Essentially this means that although larger groups might have higher rates of overall productivity than smaller teams, the individual members of the larger team have lower rates of productivity than those in the smaller team.

This theory is commonly referred to as social loafing. When efforts are being expended by more people, the team as a whole is more likely to experience a decrease in individual work efforts. Some employees may start to slack off, knowing that their lack of effort will be compensated for by the other working members of the team. Others just simply won’t work as hard as they otherwise would because it is more difficult for them to see the effects of their contributions to the team. Altogether this leads to increased overall output and decreased individual output, a scenario that doesn’t suit your company well.

How To Determine The Best Size For Your Team

So, how can you avoid the Ringelmann effect in your organisation? How can you know the ideal size for your particular team? These are questions that have been asked by millions of companies around the world. Unfortunately, there is not one answer that applies to all companies, as the size of the team is completely relative to the task that must be performed by the team.

1. What is the team trying to accomplish?

Different organisations have their own needs. For example, a team of painters can never really be too large as the building will get painted more quickly with a larger team than a smaller team. However, a corporate team of auditors will not experience the same effect and might see more negative results from having a team that’s too large.

2. How many specific and separate roles are necessary to complete the team goals?

What is the absolute number of unique roles you need for your team to succeed? You have to ensure that the team will not have any skills gaps, as this may prevent success and cause frustration. But, you also want to avoid having too many people with similar job skills and roles on the same team as they will begin to lose motivation and productivity.

3. Is there a deadline set for work completion?

Work that needs to be done quickly can sometimes call for a larger team with more working power to accomplish all the necessary tasks on time. This is especially true if no creativity is required for completion of the tasks. Longer-term projects can benefit from smaller teams that will experience more cohesion and positive discussions about the work.

According to Katherine Klein from Wharton University, the widely accepted ideal size for a working team is five people. If you go beyond five people the team starts to lose individual performance, while teams smaller than 5 people can experience awkward team dynamics and skills gaps.
Klein’s research matches that done by other researchers around the world who have also tried to answer this question. The second most common answer to the question of ideal working team size is six people, as the dynamics of even versus odd numbered teams can cause some differences in opinion.

At the end of the day, you have to look at the needs of your organisation and the reasons behind team formation. Why do you need a working team formed, and how many people will be required to best fulfill the requirements placed on your team?

Don’t stress as much over the size of the team as you do about more important factors of team success, such as the ability to work well together, filling all the necessary roles, and diversifying the team. Total Team Building

If you have a new team or are looking to build a better functioning team then contact Total Team Building. We have a range of team building activities that can help team members get to know each other and work together more effectively.

Contact Us Today To See How We Can Help

Leadership is not a one size fits all concept that you can slip over every situation. It looks different in many different situations. While there are many principles that apply to leaders in all areas, they must be adapted to fit the specifics of every situation. One principle that is somewhat controversial in some circles is the idea that great leaders train up their replacements – even when they’re not planning on leaving the job. 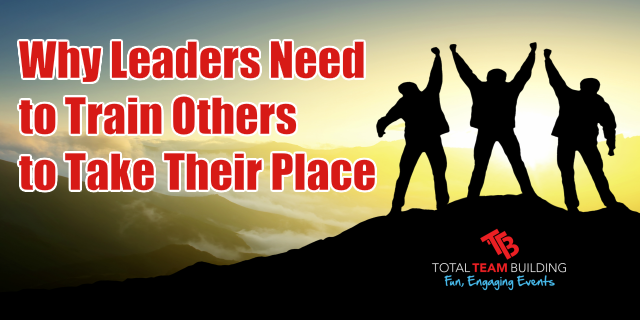 Developing Others in Leadership

Few people are born into the world of being great leaders, but the majority of people can learn the skills it takes to lead well. However, they will need someone to help them develop those skills. This is where senior leadership staff, fit in. If you have any leadership experience at all, then you have valuable knowledge that can be passed on to the next generation of leaders in your workplace.

A popular argument is usually raised whenever there’s a discussion of training your employees to do your job. The argument is that if you teach someone to do your job, they will be able to replace you and will make you a redundant employee. If there’s another employee capable of doing your job, who won’t ask for as high of a salary, then you may just end up losing your job to the very person you trained.

It’s easy to see where this fear comes from, but it’s actually not founded in proper thinking about leadership. Training up your staff and developing their leadership capabilities does not mean they will replace you, but it does make you infinitely more valuable to your organization and it opens up opportunities for you to move up.

A New Perspective on Leadership Development

Having more employees that are focused on solving problems and accomplishing goals is excellent for any organization. It’s even better if those employees are given the tools they need and are motivated to lead the company to the right solutions. If you as a leader have to dictate everything your staff members should do, then you’re not doing a good job and you are creating a stressful job for yourself.

If you want to be irreplaceable to a company, train your employees to replace you. This will give your company many more qualified, skilled leader’s to drive company progress forward. It will also bring up productivity in the workplace, especially when teams are involved because each person is going to feel more responsible for their own work and will be more willing to contribute positively.

Develop your team by allowing them to think outside of the box and come up with solutions to problems on their own. When you act like a dictator and demand to be in control of every decision that’s made, without accepting input or seeing what your team has to say, then you are creating a stagnant work environment that will not make you look good for promotion or accomplish company goals.

When leaders train their staff to be their replacement by developing leadership skills in the team, they manage to create an exciting, desirable, and productive workplace. You will also make your importance more obvious to the company, even though there are now others who can do your job as well. It’s vital that you take hold of the idea of developing your team to be able to replace you because this is the only way to make a truly successful workplace and a clear forward path upwards for yourself.